I need a vacation from my vacation!

So I took my two weeks of vacation and proceeded to run myself ragged until the last three days! Our daughter, Jessica graduated from high school, so we had mucho family visiting from Arkansas, a huge grad party for Jess as well as JD, Andrew's g/f Tricia's brother. We have been lucky enough to become very good friends with Tricia's family since she and Andrew started dating, so since we combined Andrew and Tricia's grad party five years ago, it only made sense to combine Jess and JD's grad party. We got a Little Mermaid bouncy house as well as sumo wrestling suits, which were LOVED, and there's was a ton of food! Here's a few pictures from the party. I have to start collecting pictures from everybody else because I was too busy to take many. 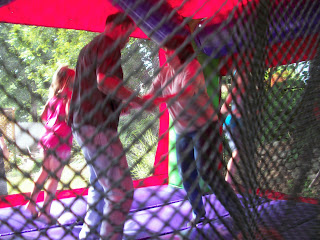 This is hubby Aaron in the bouncy house with his sister Brenda. She came down from Maine to celebrate with us. 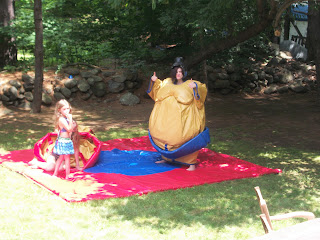 Jess in the sumo suit daring one our younger partiers to wrestle her! She was successful in getting her into the suit, but then was out-wrestled! 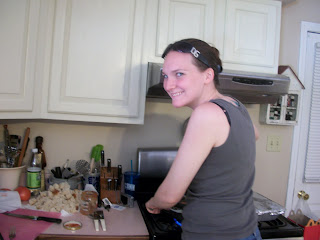 Our favorite gal Tricia creating the ever favorite bean dip. She dove right in and helped from start to finish. I don't think the party would've been as much fun without her!!

Our son Andrew (who is also Tricia's boyfriend) , had left the day before the party for a job in Alaska. He was originally accepted for a job on the slime line (that's where they gut and clean the salmon) at a fishery on Petersburg Island. Once he went through orientation, the freezer crew manager took him aside and asked if he'd rather work in the freezers. Andrew jumped at the chance, and it really sounds like he's in his element. The day he left had a bunch of us crying a bit, but we all knew it was something he had to do, and he'll be back in a few months....unless he gets a job on a fishing boat in Alaska! I told Tricia she will need to start buying cold weather clothes soon!! :o)

I did get a chance to start a new rug, and got everything but the background hooked. 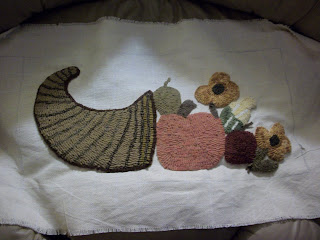 This is a shot without the flash. The flash made the colors look almost neon (lol) and they really are quite primitive. I'm debating about adding large yellow squash on the very right, but might just leave it as is. Tomorrow, I'm going to work on something I've had percolating for a few weeks. If it works, I'll let ya know, if it doesn't, then mum's the word...lol. I will get back to work on the horn of plenty in the picture above to get the background hooked some time next week if I survive going back to work...*sigh*.

Now it's off to watch a bit of tv, then to bed. Because Aaron and I are kid-less we are off the hook for any fireworks! While I really like fireworks, I hate the going home traffic, so we're just chilling at home...yeah!!
Posted by Naomi at 10:15 PM No comments: 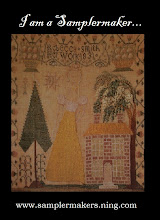 "We are all a little weird and life's a little weird, and when we find someone whose weirdness is compatible with ours, we join up with them and fall in mutual weirdness and call it love."